Hey guys. Jack “Laugh Machete” Crosbie was being a twanknexus and not sending me a guest myth like he promised BUT THEN HE SENT ME ONE. FEAST YOUR EYES ON IT. Also I feel bad because the link I posted to Luke Coulter’s website was kind of broken. his website is http://dirtyfilthylies.blogspot.com

This is going to be a very special post of Myths Retold that will not include any actual “myths” per se although you could totally debate how accurate any of is.
This post is called
THE JULIO-CLAUDIANS WERE NOT VERY NICE PEOPLE
and it is basically going to illustrate some of the highlights of the first Roman Emperors kinda being dicks to everyone.

For reference the Julio-Claudians were the family descended sorta from Julius Caesar that became Rome’s first Emperor-family thing round about 27 BCE after Caesar got shanked and everyone finished squabbling and killing each other (jk they never finished doing that).

This is their goddamn family tree. http://www.roman-emperors.org/jclaud1.htm

You will notice first that it is in several different colors, which is intimidating just to fucking start, and then you look at all the little dotted lines and you realize that at one point, EVERYONE HAS FUCKED EVERYONE or at least fucked someone’s mom/ sister/ brother/ uncle/ pet goat.

Like, if the Julio Claudian family was MY family, my mom would have married AT LEAST both of my uncles
AT LEAST twice which is weird considering one of my uncles is a very quiet man who calls dogs “pooch”… spent the last 10 or so years trying to decide whether that was awkwardly endearing or just downright disturbing.

This is the author’s interpretation of the Julio-Claudian family tree: 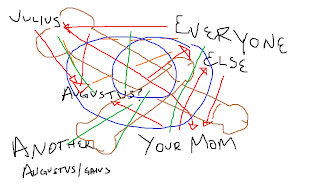 You will also notice that THEY ALL HAVE THE SAME NAME. This may also be another slight exaggeration, but the Julio-Claudians really liked recycling names and changing them every 5 minutes; they would name sons the exact same thing as fathers (which is still sorta done), but then they would change it when important things happened, or they would add or subtract names kinda on a whim, and then some dick historian would just stick one name on them if you were lucky and two if they just wanted to fuck with you. I mean seriously you could just show up at the palace and be like “YO GAIUS-LIUS-GUSTUS-US and like 50 kids would come running up all jumping over each other in their little Roman tunics and shit like little Roman kids did all fuckin babbling in Latin or whatever, boom, efficient way of keeping the little fuckers in line but

For example, if I were a Julio-Claudian my name would be Jack Hans Richard Sumpf Paul Crosbie but then when I became Emperor it would become Jack Richard Crosbie Sumpf Caesar or something and then someone would give me a nickname and I would go down in history as “Turtle Helmet”.
Also I would be banging/ married my cousin.
Which is also strange because my only cousins are all male and live in England or are 45, married, and living in Minnesota which makes reproduction kinda difficult in any case. But if had a hot female cousin remotely in my geographic area I would probably have to be all over that. Hypothetically. Flexible on the hot part hypothetically.

So Augustus, right, also known as Octavian, the first of the JC bros to be actually “Emperor”, decides to throw a dinner party.
And by “throw a dinner party” it is taken to mean “go over to a dudes house for dinner and then bang his wife in the middle of the meal”.
No joke.
Augustus is all dinin’ and winin’ with this ex-consul (which is like a guy who did stuff in politics) and in the middle of it he’s all HEY YOU KNOW WHAT WOULD BE A GOOD IDEA?
And the consul guy is all NO BUT I BET YOU DO!
And Augustus is like HOW ABOUT I FUCK YOUR WIFE
And the consul is like OMG THAT’S A GREAT- wait what did you say emperor sir can you run that by me one more time
And Augustus goes YEAH NO RIGHT HERE
IN THAT BEDROOM
BRB
Suetonius (some dude with a white beard and shit writing this shit down) is kinda unclear on what kinda hanky panky actually goes on and just says that Mrs. Consul comes back with Augustus all sex-haired with “glowing ears”
He obviously means like with flushed rosy ears but it got me thinking how awesome would it be if your ears fuckin glowed like neon colors every time you got laid, just walking around all HEY BRO PEEP MY AURAL INTERFACES THEY’RE GLOWIN’ instead of HUR DUR HEY JIMMY SMELL MY FINGER which is really creepy who actually does that

Augustus and Mrs. Consul come back to dinner after parkin the yacht in hair harbor and that’s all Suetonius has to say about that, just kinda skips right on ahead to Augustus and his bros stripping random girls/ matrons and appraising them like slavers would just for kicks and other socially acceptable behavior.

I think this is going to be my last exhibit because I’m really tired and I’m not sure if anyone wants to read anymore about the Julio-Claudians but I could totally do more exhibits of JC debauchery if people like that sort of thing. I could also do more exhibits of trees because I know Ovid hates them but I actually rather like trees.

OK SO EXHIBIT THREE FOR REAL

Anyway, Tiberius. He’s emperor after Augustus because he is sorta related to him and succession was kinda like playing hammer roulette in the early Roman Empire (hammer roulette is where you sit a bunch of people in a field at night in the dark, throw a hammer as high as you can in the air and everyone gets up and runs) and the hammer of Emperorship donked Tiberius on the head after Augustus.

Let me rephrase that to succession in the early Roman Empire was like playing hammer roulette but actively trying to lose.

Wait, actually what I’m trying to say is it was really random/ complicated and probably nothing like playing hammer roulette except for the fact that horrible, grievous, “oh dear Jesus now we have to take Mark to the hospital but we’re all plastered in a field miles away from our car and I have never seen a hammer actually hit a person before” amounts of pain are often involved in both.

So Tiberius does a lot of really fucked up things, but we can talk about those later. They mostly involve killing the fuck out of everyone who blinked at him wrong, which included, well, almost everyone.

MOST IMPORTANTLY, though, he DIES.

But he manages to die in a really comical way. I guess it’s only comical if you think murder is comical. Anyway.

So Tiberius is lyin all old and stuff and dying as old people are wont to do, especially if they’re Roman and possibly being poisoned. Sorry if any of you have relatives who live in Rome and are currently elderly and poisoned, not trying to offend anyone here.

Some people (like Suetonius) think that Tiberius’ successor, Caligula (whose real name is Gaius something) was giving him some poison, which is highly likely, others think he was just old and sick, I’m gonna choose to go with Tacitus/ Suetonius (vaguely) and tell it this way:

The way I like to tell it, Tiberius is really sick, like wasting away and stuff. But he keeps not dying, they keep thinking he’s gonna die and then he keeps not dying at all. I had a cat like that. It was really sad. She just chilled out, pretending to die for like two years but not actually getting around to it.

Anyway, Caligula is pretty eager to step up on that throne business and start stompin around the empire. But, like, it’s not really kosher if he just openly offs his predecessor, so he’s kinda just watching Tiberius (slash poisoning him), waiting for the bro to die. Eventually, Tiberius has this awkward fainting spell where everyone thinks he’s dead, but he decides not to be and so one of Caligula’s supporters just shoves a pillow over his face and smothers him. Wups. Here is his death in play format

TIBERIUS: I DON’T FEEL GOOD
CALIGULA: SORRY HERE DRINK THIS
Tiberius drinks stuff
TIBERIUS: THAT WAS GROSS WHAT WAS THAT
I ASKED FOR MILK
YOU DIDN’T GET ME MILK
CALIGULA: IT WAS TOO MILK SHUT UP YOU’RE OLD
Caligula leaves
TIBERIUS: MAN I’LL SHOW HIM
WHAT IF THIS MILK KILLS ME
THEN HE’LL FEEL REALLY BAD
I SHOULD PRETEND TO DIE
OH SHIT I’M REALLY DIZZY THIS WON’T BE HARD
Tiberius faints
CALIGULA’S HENCHMAN: HEY CALIGULA SENT ME BACK HERE WITH MORE MIL- WOAH WOAH ARE YOU OK DUDE?
HEY CALIGULA
I THINK TIBERIUS IS DEAD
CALIGULA (from another room): REALLY? SWEET!
Tiberius wakes up
TIBERIUS: HEY WAIT NO THAT’S NOT HOW IT’S SUPPOSED TO GO
CALIGULA’S HENCHMAN: WOAH WAIT WHAT? FUCK YOU NEED TO BE DEAD I JUST SAID YOU WERE DEAD
Henchman uses pillow! It’s super effective!
PROBLEM SOLVED

Oh yeah these posts need a moral. I guess the moral of these stories is: Stop complaining about your government, unless your family runs the government and the government is making you bang your cousin and smother the occasional uncle.

Jack Crosbie is too cool to have a website but you can follow his twitters at @jackcrosbie or something. Not that he ever tweets. He’s too cool for that too.

10 thoughts on “JULIO-CLAUDIANS WERE NOT VERY NICE PEOPLE”